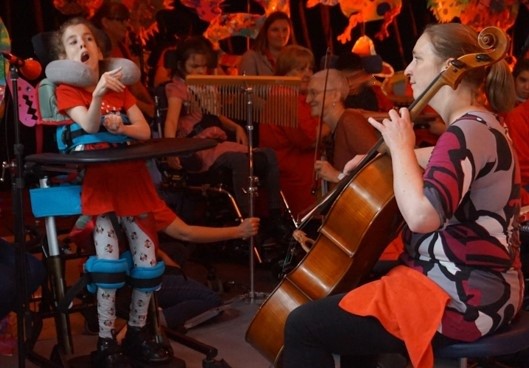 Ensemble Reza are a group of musicians who inspire young players and take music to local audiences. Since April, Ingfield students and staff have been working with Ensemble Reza musicians and a music technologist to compose music inspired by Carnival of the Animals by Saint-Saën.

The project launched with a performance of the piece for students and staff at Ingfield by Ensemble Reza involving violins, cellos, a viola, a double bass, clarinet, flute, percussion and piano.

Students took part in a number of workshops in their team houses with students from across the age ranges. They worked together to produce an imaginary animal inspired by the Ensemble Reza performance and compose pieces of music, write poems and produce art work based around their animal. SameSky, the largest community arts charity in the South East ran art workshops for the students and there were weekly workshops with the Ensemble Reza musicians.

After much hard work and a lot of fun, the students gave two performances of their music against a stage set constructed with their pieces of art. Families, friends and funders attended the performances in which the students showcased their musical talents with a wide range of musical instruments and the use of assistive music technology.

The performance day was thoroughly enjoyed by all. Audience members were astounded at what the Ingfield students had achieved in a relatively short space of time.

Everyone at Ingfield is grateful to Ensemble Reza, Jason Rowlands music technologist and SameSky without whom this project would not have been possible. We also wish to thank those whose generosity provided funding for the project: The Friends of Ingfield, Ensemble Reza Friends, the Knighton Fund and the DeWinton Fund at Sussex Community Foundation, Christ’s Hospital school and Savills.