Jack has difficulty maintaining his head position without support.

Jack has never used his vision in any meaningful or functional way; his head was always down, making it impossible to visually access his environment or visual stimuli and specialists were unable to measure his sight loss or assess his visual needs – until very recently!

Jack has now been prescribed his first ever glasses and has begun using the ‘Head Active’. The Head Active is a dynamic head positioning system which enables the user to maintain an upright head position whilst strengthening their neck muscles. Jack wears this system for short periods throughout the school day. Jack has already shown promising progress with his ability to maintain his head position following use of the Head Active.

Jack has begun to use a colour tent*, a CVI intervention that aims to ‘awaken’ his visual awareness and visual processing upon which he can build visual behaviours that will give more meaning to the world around him. After just four colour tent sessions, Jack is displaying visual progress.

*The colour tent is part of a study by Suzanne Little (QTVI, Meldreth School) and is being shared with Mr Bowman at GOSH with the view of taking it forward for further research purposes. Claire Crowther (QTVI, Ingfield Manor School) is supporting the study with further evidence. 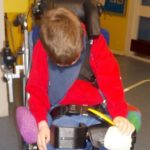 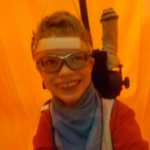 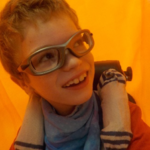